Below is a special article written by Tom “Dr. Cue” Rossman with “heartfelt” meaning:

THE “HEART OF A CHAMPION”

After 5 decades of being around billiards in all its forms, I realize that champions of our sport possess select attributes that may be exhibited in a myriad of “heartfelt” and yet different ways. Many fans, players, media sources, and sponsors perceive a champion with “heart” as a person that gives their best effort and wins a game or match per a designated scoring system. It is about the “winning”, which is the GREAT pursuit.

The aforementioned type of champion normally displays high-level skills for executing each shot. In addition, a superior knowledge of game strategy is evident. This player is finely tuned in his or her mechanics, kicking / banking systems, mental stamina, and precise muscle memory conditioning via disciplined practice. A possession of focused confidence and “having what it takes” to play well emerges without fear or reservation of purpose.

Other champions may display a different type of “heart” as perceived by those watching. This type of champion may not have a high winning percentage, but will present a calmness of play and spirit that exhibits “success” in an entirely different manner. A gentle smile and peaceful demeanor for this individual reminds any opponent that whatever the final score may be, all is well – win or lose! The “heart” of this champion has a mighty resolve to “enjoy the roll” in the worst of times as well as the best! It is all about the “playing”, which is GREATER than the “winning on paper”. This type of “heart” realizes that there are so many things more important than a round sphere rolling across a cloth covered slate surface, and that there are some who can’t play at all for various reasons.

A third type of champion is one we seldom think about! The unique “heart” of this person does not have to win or play. He or she can experience the love of the game by sitting patiently in a chair watching the “colorful balls” continue their magnetic roll and hearing a sweet click as they bump into each other. Loving the game…from the “heart” is the GREATEST discovery over everything else.

During a recent trip to Vegas I witnessed several champion hearts that never racked, never broke, never hit a ball, and never circled a winning score. Something special about these individuals / fans of our sport radiated a type of “heart” that perceived 1) every loss as a victory in disguise, 2) every miss as a make in disguise, and 3) every failure as a success in disguise.   “Racking up a victory in one’s game and life,” echoed a simple mantra for a journey of joy both “on and off” the table – to share the beauty, promise, and vision of the special art form before them – forgoing personal gain and/or recognition.

As you continue your “game and life” travels through the rest of 2015 and beyond, may each of you experience the champion “heart” within!!

Below is a special article from one of our Artistic Pool Playing Artists that displays what Artistic Pool means to him; thereby displaying a “champion’s heart” in spirit and sport outreach effort.  This section will be used to list other “champion hearts” both from an individual point of view, but also in conjunction with others that share a common interest of sport foundation and strength.

My name is Ben Zeman. I am the founder of the Wisconsin Artistic Pool Player Association, a group of almost 280 members consisting of some of the best shooters in the state of Wisconsin and even the world. This is my story, the story of how pool saved my life.

On February 25th 2014 I had been experiencing fatigue and a certain muscle twitch in my left breast. I had been unhealthy for some time due to an out of control weight problem. I was 34 years old and 390 lbs. At my heaviest, I weighed 448 lbs and could barely walk. It took everything I had just to take a shower. I felt like I was trapped in my own body with no way out.

I went to the doctor half expecting him to tell me it was a pulled muscle and I needed to rest. Instead I was told that my heart was swollen from retaining water in my body and it was only pumping at about 20-25 percent of its normal capacity. He told me if I didn’t change my ways I was going to die.

All sorts of thoughts started running through my head about my two little girls and what would happen to them if I were gone. What had I done? How could I do this to my children? I went home that afternoon to my family and told them the news. They were devastated.

That evening, I tried to come up with a solution to this nightmare when I came up with my diet and exercise plan. The plan started by getting a YMCA membership and cutting all canned and box food out of my diet. I started cooking for myself and walking at the local mall. I needed to lose weight fast. My life literally depended on it.

I started slow, only able to walk 10-15 minutes at a time. I spent my first weeks huffing and puffing while shooting hoops, ridding bicycle and doing whatever else I could to keep my body moving. After awhile, I started venturing into other areas of the YMCA such as the weight room and the pool. That is when I really started to see results. Each day I pushed myself further and further with my workout. I went from spending a half hour in the gym and a half hour in the pool to one hour in the gym and two hours in the pool in no time.

As I started to see the pounds drop off, I started to look for reasons to stay on my feet. I knew that as long as I was up on my feet walking around instead of wasting the day sitting in a chair I would continue to lose weight. That is when I found Artistic pool.

I’m a caregiver at a mental health facility that houses four men that need a little help. It’s a great job and is very rewarding. My duties include cooking, cleaning, passing meds and anything else that is asked of me. It is a very laid-back work place with quite a bit of down time. Luckily they have a pool table.

As long as my duties were taken care of I was allowed to use the table anytime I wanted while at work. So I dusted off my old set of cues that were sitting in the back of the closet and started shooting with some of the residents for exercise.

As time went on and my interest in pool came back to me, I started thinking about trick shots. You see Artistic Pool is something I have dreamed about doing all of my life. Ever since I was a child I wanted to “spin” a ball. Luckily I am a friend with one of the premiere custom cue makers in the world, Brandon Jacoby of Jacoby Custom Cues.

One day, while watching our two little girls play soccer at one of the local elementary schools, I told Brandon about my interest. I told him about how I had dreamed about being an Artistic Pool player and how I was having trouble doing masse shots. I told him how it was important for me to do this before I died. That is when he told me about the Jacoby masse cue that he had down at the shop. Once I had that masse cue in my hands I knew it was meant to be. After a twenty-minute lesson from Brandon I was on my own. Before I left the shop, Brandon jokingly told me that if I got good at using it he would sponsor me. I shot him a smile and told him “I’m going to keep you to your word man.”

The months that followed went by in a blur. I played and I practiced for hours at a time. Through my two-hour workouts in the morning, my new diet and the will to learn artistic pool before I died the pounds flew off. I know this sounds crazy but I was losing 5-7 lbs a week. It took me 129 days to lose 100 lbs. All together, I have lost 185 pounds over a two-year span.

While I was investing all of this time in my newfound passion I thought it would be a good idea to make videos of some of the shots I was starting to perform. It was important for me to leave something behind for my children to be proud of just in case I didn’t make it through my upcoming heart surgery.

I started posting some of these videos to various pool groups on Facebook trying to find other people in my area that were already involved with Artistic Pool. I figured there was some sort of group or club in one of the bigger cities here in the state that I might be able to join and learn more about my new hobby. To my dismay there wasn’t. In the whole state of Wisconsin I couldn’t find one single person who was involved with Artistic Pool.

Soon, I started to get some reactions from other pool players here in the state from my videos. I eventually was asked to start an Artistic Pool group on social media just for the state of Wisconsin. I knew this was a big responsibility, but I decided to go for it. This is when I founded the Wisconsin Artistic Pool Player Association.

Since the start of the WAPPA it has grown from 1 to over 275 of some of the top players in the state of Wisconsin and even the world. It has become a place where we come to share ideas and information about Artistic Pool.

We’ve also started a youth billiards program called the WAPPA Junior 9 Ball League and I even had the honor of being the tournament director for the 2015 Junior 9 Ball State championship.

The most incredible thing happened to me on March 20, 2015. That is the day that all of my hard work and love for the game really paid off, the day that I entered my first professional Artistic Pool tournament. It was the ACSISA Open Artistic Pool Championship held at Pheasant Run Resort in St. Charles, Illinois. I had the honor to compete against some of the top Artistic Pool players such as Andy Segal, Nick Nikolaidis, Steve Markle, Marty Carey, and many more.

The whole weekend was spectacular with a lot of laughs and great friendships made. When it was all said and done I scored a total of 120 pts and finished with a rank 35th in the world out of 50 professional Artistic Pool players through the WPA (World Pool Billiard Association).

The past year and a half has been the craziest time I’ve spent on earth to date. It has been a heck of a ride going from 448 lbs and near death to being a ranked professional Artistic Pool player. It’s something I work very hard at and will continue to do so as long as I’m able. I feel as if God gave me a second chance on life and I will dedicate every day I can to enjoying life, love and Artistic Pool for the rest of my days.

For complete information about Dr. Cue Promotions please visit our company site at: 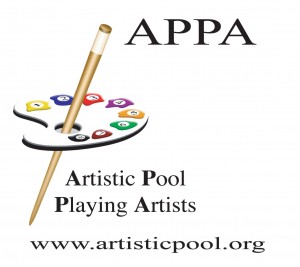